MPCMI.com is pleased to introduce a discursive diva from Deerfield Beach, Florida leading the Babblon Movement

The landscape has been shifting in many directions for some time now, but it is definitely apparent that one of the main off-ramps on the rap interstate has a feminine influence. More young females than ever are stepping up to find their place in the genre, and one such sprite is Gaea LaBelle, an FSU graduate with a B.A in Creative Writing. LaBelle, who credits Kanye West’s “Can’t Tell Me Nothing” off Graduation as her first hip-hop love, packs a ponderous punch as a performer. Her slender frame and sweet bohemian style lures you as she seamlessly runs through songs like “Please Settle Down” on stage with her Heroine trio, a female group that also includes songwriter/poet Jessica Hill and guitarist/singer Christina Parks.

Gaea’s stage show is as alluring as a belly-dancer’s dabke, with her self-proclaimed “Kittens” using call-and-response techniques, back-and-forth verses, and playful lyrics that could entice the most hardcore of rap followers. The leading lady of Heroine knows how to run with the boys as well, teaming up with Code 3 members Lance Markeith and D. Wind to form a truly dynamic ensemble of spitters on a consistent basis. MPCMI.com gathered up the gang after a recent performance to find out more about their chemistry and Gaea’s point-of-view on representing as a female in the game:

Ariel “M-P” Bedford: Is “Spell On You” your version of a staunch introduction, or a warning shot to critics/haters to not doubt your ability as an artist?

Gaea LaBelle: I think… I think it was the latter-it was definitely because me being a female emcee it’s never expected for me to be able to rap or anything like that. So I kinda put a whole bunch of words together, like, “Seriously, I can do this in a sundress!” … I don’t want to be labeled as a woman, even though I do represent being a woman. But it was deeper than that; it was about the words-not about who I am. About what I’m saying, and how it represents me.

M-P: What current femcee do you most admire?

Gaea: You KNOW Nicki is my girl-and this is why she is my girl. Cuz I know she’s catchin’ alot of flack from alot of haters. But once she spits, she’s hard. Come on… We just gotta be real about that. Two, she’s so business-minded, like… I’m just very impressed-me being a part of Babylon and that being a business that I’m trying to grow upon and make grow. Nicki does her thing as far as, you know, endorsements-she has lipstick, nail polish colors, like, she represents being a woman. She makes being sexy cool in rap. So I like that about her.

M-P: Give me your opinion of Nicki Minaj’s “Lookin…” record-and the backlash that ensued based on the response from its subject matter and some of the unofficial artwork associated with it

Gaea: So you’re talking about the Malcolm X…

Gaea: OK, when I first saw it I wasn’t offended… Because that’s how Malcolm X was lookin’-like “Who are these lookin’ ass niggas trying to step to me and break me down?!?! So imma be strapped and check my surroundings” and I felt like [that was] exactly what Nicki was doing [to represent herself presently as an artist in the industry]-I understand why people didn’t appreciate it because he did it for a very bigger purpose. People didn’t understand why she was doing that and I feel she had something to say that was mogul-monumental-as Malcolm X [spoke upon important things and had something monumental to say].

M-P: Do you feel that maybe because of the fact that Malcolm X was [caught looking out his window with a rifle in his hand] because he feared for his life [as a result of] not only government/radical representation of “the man and the system” trying to take him down, and when you think about Nicki’s record, it’s more-so she’s being derogatory in reverse towards African-American men… and that image of Malcolm X wasn’t being derogatory of African-Americans as a race individually but just the sect of the Nation Of Islam that he had a relationship with and radical “white people that were against the revolution”?

Gaea: But there was some “lookin’ ass niggas”! They were some “lookin’ ass niggas” regardless of how we try to make it seem-he was in the public eye doing something that people did not like and they wanted to stop him for it. And he was by all means trying to do everything to protect himself. And I feel like Nicki… Like, we don’t realize that she’s also in this public eye-and she’s controlled. And she wants to break out and do something for herself and represent herself in a way too that she needs to protect herself-to put herself in his shoes. So I think that we just took it a little bit too deep, but I understand why people were offended. 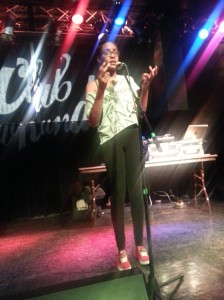 M-P: What track do you think better represents you as a rapper-“My apology” or “Phone Numbers”?

Lance Markeith: He is a journalist-and I BET I know her answer!

Gaea: He was right, so I’m gonna change my answer now. “My apology”-I liked it cuz it was really sarcastic. It was definitely dedicated to my ex! [laughs] But I am gonna say “Phone Numbers” best represents me-cuz I’m a shit-talking person… And I love Wiz Khalifa. Somebody told me that they didn’t like the song so I was like “Let me get on it and see if I can make it better for the person” and I wanted to represent the ladies again so, “Everywhere I go, they be asking for my phone number…” it’s a true story! [laughs] But no…

M-P: I wouldn’t doubt you… So what’s next 4 Gaea LaBelle?

Gaea: Oooh, so much! So many mixtapes, so much free music for everybody to listen to. Alot more work with Heroine-Christina Parks, that’s my girl. “She be sangin’, she be sangin’!” [giggles] … Yes, but see you’re gonna see alot from us-and with Lance Markeith, we have our mix-tape All My Soul is gonna come out really soon. “Spell On You” is actually one of the tracks on that mix-tape… So-exclusive… [grins]

Gaea LaBelle and her friends truly have a fun-loving bond that should lend itself for wonderful artistry in the future. Be lookin’ for new material from Gaea via her website http://www.gaealabelle.com/ and follow her on Twitter at https://twitter.com/gaealabelle.

There Are Many Types Of Performance Built Log Splitter

You have reached your limit of 5000 friends!

File size error: The file exceeds allowed the limit (488 MB) and can not be uploaded.

Unable to upload a file: This file type is not supported.